(In-Person Index weights % virtual instruction at 0, % hybrid instruction (2-3 days per week in-person) at 50 and % traditional (5-days in person) at 100). More on our Methodology

The chart below shows the average in-person index for each state over the course of the academic year. The District of Columbia, not shown, would be last, behind California. To the points made in the piece in The 74, the ten states with the highest in-person indexes for the year have Republican governors, and nine of the ten lowest states have Democratic governors, the exception being Maryland.

Below is our In-person Index by grades K-5, 6-8, 9-12 over the course of the year. K-5 students had the highest in-person index all year, and the gap became widest in the early Spring when "Always Virtual' states and big cities started returning to in-person and often brought in K-5 for in-person weeks ahead of older students. The gap narrowed as the year went on.

One of the defining characteristics of in-person learning in 2020/21 was the difference in urban and non-urban learning plans. We took a look at the Top 50 metro areas and measured the in-person learning index for their city school district, and compared it to the rest of the country. The following chart is weighted for student population over the course of the year. 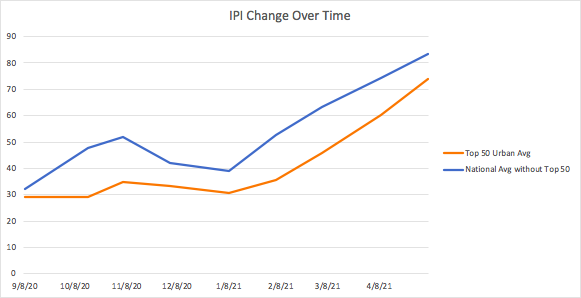 Burbio actively monitors 1,200 districts, including the 200 largest school districts in the US.  District plans are reviewed every 72 hours to identify changes. School districts in the data set are a mix of sizes and distributed nationally in such a way to represent local decision-making across the country and averages are weighted to reflect student populations.  For more details on methodology or detailed breakdown of county information email dennis@burbio.com.

Methodology | Community Activity Index | Most Recent Press | About Us | Contact Us